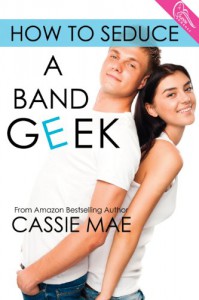 Somehow I have a love/hate relationship with this book. I kinda love certain bits and pieces, while I really loathed others.
The storyline is cute-ish. Kinda your typical YA romance but also kinda more. More annoying but then again with some surprising depths and some sweet gooey goodness to top it, so also with more substance.

My biggest issue in fact was Sierra. I didn't care much for her in How to Date a Nerd, I really couldn't stand here in this one. Her constant adjustment of her clothes, her judgmental comments,  her behavior, well basically all about her went on my nerves. But then as the story went on, she turned out to be a really loyal friend and actually despite her judgmental view of everyone, she did grow on me. Some how I wanted her and Levi to work out. Though Levi seems way to good for miss annoyance, he brought out the best in her and while she was with him she changed. She became more herself, rather than a sex-kitten-wanna-be. But also through him she started seeing that the world isn't black and white. That not everyone is the same or what they are first glance seem.

I love Levi in the first book. He was this sweet and genuinely great dude and in this one he totally was a star. Even if he wasn't sure if he actually could have a relationship. But given his situation, I completely got him. While he is a hottie, he's behavior and great character is what won my heart.

I like that Mae decided to write books about characters, who don't swim in money, but come from families who work hard to make ends meet. While some of the cast seems a bit over the top, to polarized, I think their circumstances are more realistic than most YA books.

The writing style, left me divided as well. Because some of the times I found it a bit to snarky and simplistic, in other places I thought Mae got it JUST right.
An interesting thing is that Mae obviously is trying to convey a message through these books. Though at times it was a bit too much into your face, more subtlety would have been better in my opinion
But saying all this, let me tell you as well, I am totally going to read the next one. Because even if I had some reservations, I also did enjoy it. And in the end I felt all happy-clappy and had my cute&fluffy fix. So all in all it ended way better than it started- cute with a tad of annoyance

Which means this is somewhere between good and great- 3,5 Stars!

The boob adjustment thing
I still can't get over how much Sierra talked about adjusting her boobs and her worry about it poping out.
Which is like

and made me think of


Ooookaaaay and that's all I shall ever mention about this.